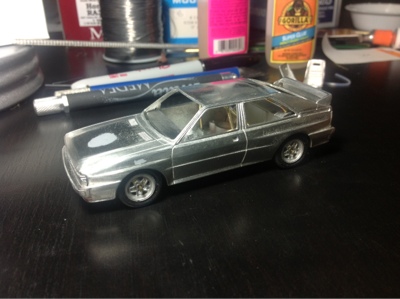 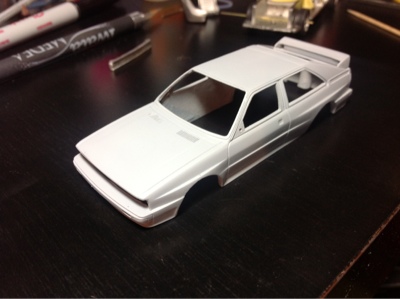 I started to think all of us who build 1/43 scale cars have mental issues. We enjoy torturing ourselves.

Why did I say that? I will explain.

Today, Tameo and MFH could be the only companies that produce precision white metal cast parts. But precise is a relative term, they are no where close to mass produced injection molded plastic kits. This is the result of limited resources of most of these companies, and the limited amount of development time in creating these kits. Now, CAD and desktop rapid prototyping is becoming affordable, kits can be more accurate.

This Audi kit is pretty old, and the quality is not that great. There are so many things that are messed up. Even though since day 1 I have been fixing one thing after another, I found myself getting more and more excited about building it. I have been spending more time on it than the Ferrari! So, why am I doing this? My only conclusion is that I simply enjoy torturing myself.

Back to the build. I got most of the stuff fixed and test fitted the major pieces. Looks ok so far. For the body, there is a boss right underneath the hood. Because of that, a dimple was formed. Got the dimple as well as numerous little dings and dents fixed with putty. I also drilled and pinned the rear spoiler for mounting. Then I sprayed a coat of Mr. Surfacer 1200. That's about all for tonight.