The rest of the grid

People admire winners, they love champions. So, winning teams, cars, and drivers are popular and they have a lot of fans. For obvious reasons, model companies make kits of those cars. For the rest of the grid, not so much.
The rest of the grid is what make races interesting. And sometimes, fight among back marker are much more interesting than the front (it's boring to watch Vettle's Red Bull on pole and run away).
And I found some of the mid field or back marker cars quite good looking too.
I just stumbled upon this site called F1 Rejects, a celebration of the rest of the grid. Enjoy!
Posted by Francis at 1:25 PM 1 comment: 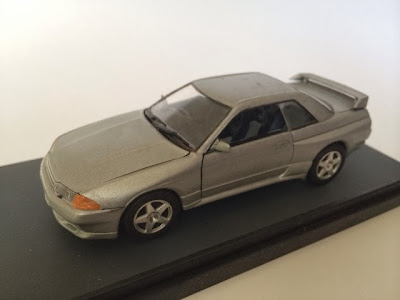 Found this little guy when I was at home in California. This was my starting point. I believe this was the first 1/43 car that I built. A Nissan Skyline GTR Nismo, a plastic kit from Rosso. (The first white metal 1/43 kit would be the BBR Ferrari F399).

The Racing43 Audi kit was the first of many things. It's the first non-F1 model, the first non-Tameo kit completed for a while. Most importantly, the first time I participated in Ws43-san's 皆で作ろう会. It was especially fun to read about other participants' build process and learn from it.

Planning ahead, I should finish the CG901 first and then figure out what to do next.

Posted by Francis at 7:12 PM No comments: 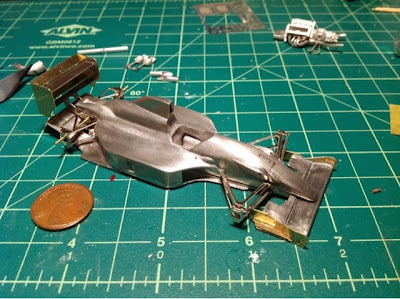 Just returned from a 2 weeks trip to London and Amsterdam, and this Friday I'll be heading back to California for Christmas. So, this week is the last week of 2013 that I'll be home in Chicago. I was going to do a bit more on the CG901, but yesterday I got sick and didn't do anything. Kind of recovered today, so after dinner, I soldered the rear wing together. This thing is taking shape!

In 2009, the F1 rules allow the front wings were changed to full car width, which I think makes the car look ugly. Now in 2014, with the lower nose height and narrower front wing, I hope the new cars will look a bit more "balanced".

This could be my last post for the year. I wish you a merry Christmas and a happy new year.
Posted by Francis at 9:17 PM 4 comments:

WS43 san just announced that the topic for 2014 is Mazda. I had fun building the Racing43 and read about other participants' build. (Really impressed by WS43 san's Porsche 911 build in just 1 week!)

As much as I want to participate again in 2014, I have a big problem. I do not have any 1/43 kit of Mazda. (I can count the non F1 kits that I have with just 1 hand). And there aren't a lot of options out there. Once in a while, there will be a 787B available. Other than that, pretty much nothing. And I would like something less common, such as the 1991 Mazda RX7 IMSA GTO. However, I have yet to come across such a kit. (3D printing and scratch build? Not sure I am ready to go down that road)

I'll keep looking and see what I can get in the next couple of months.