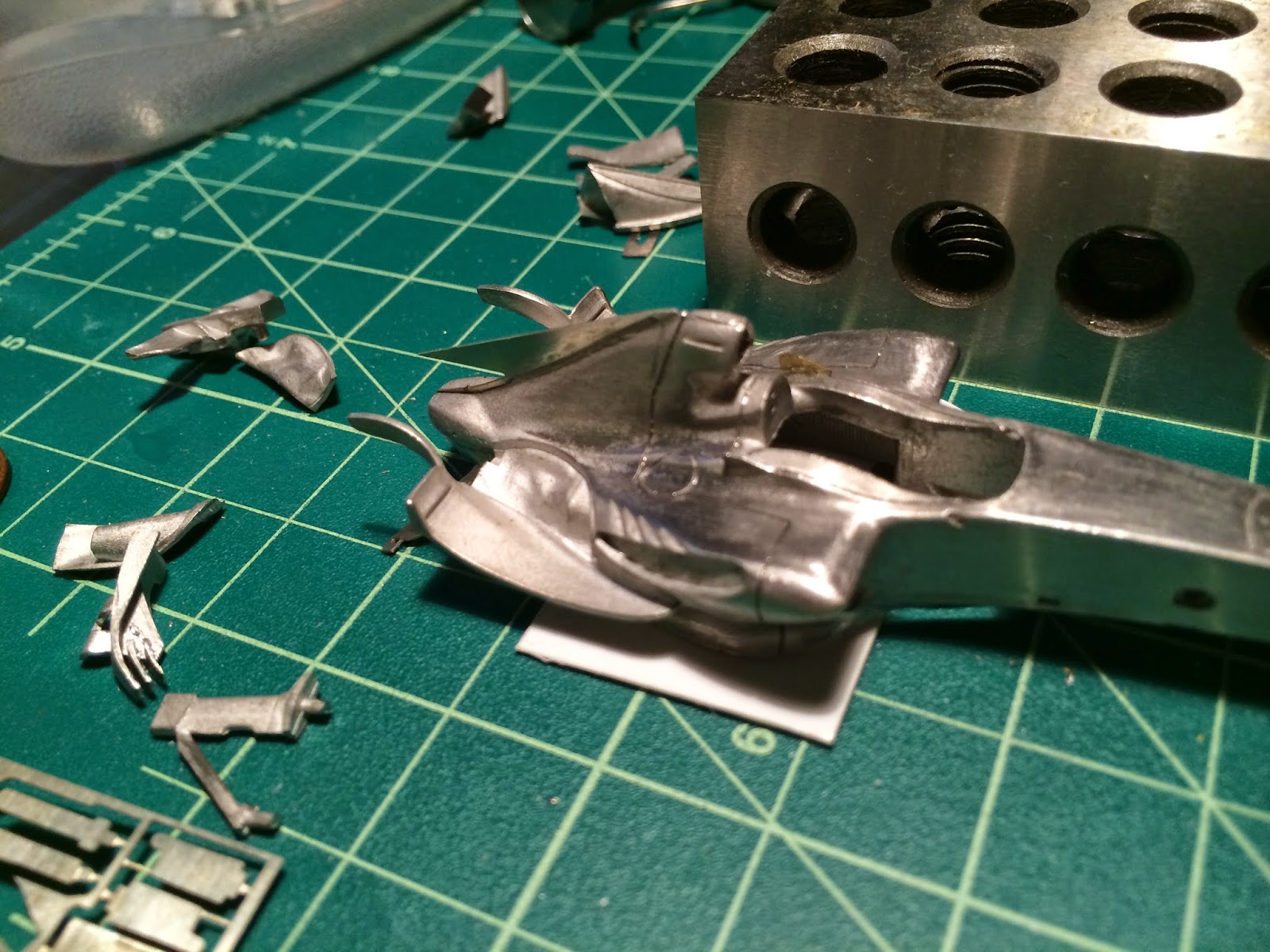 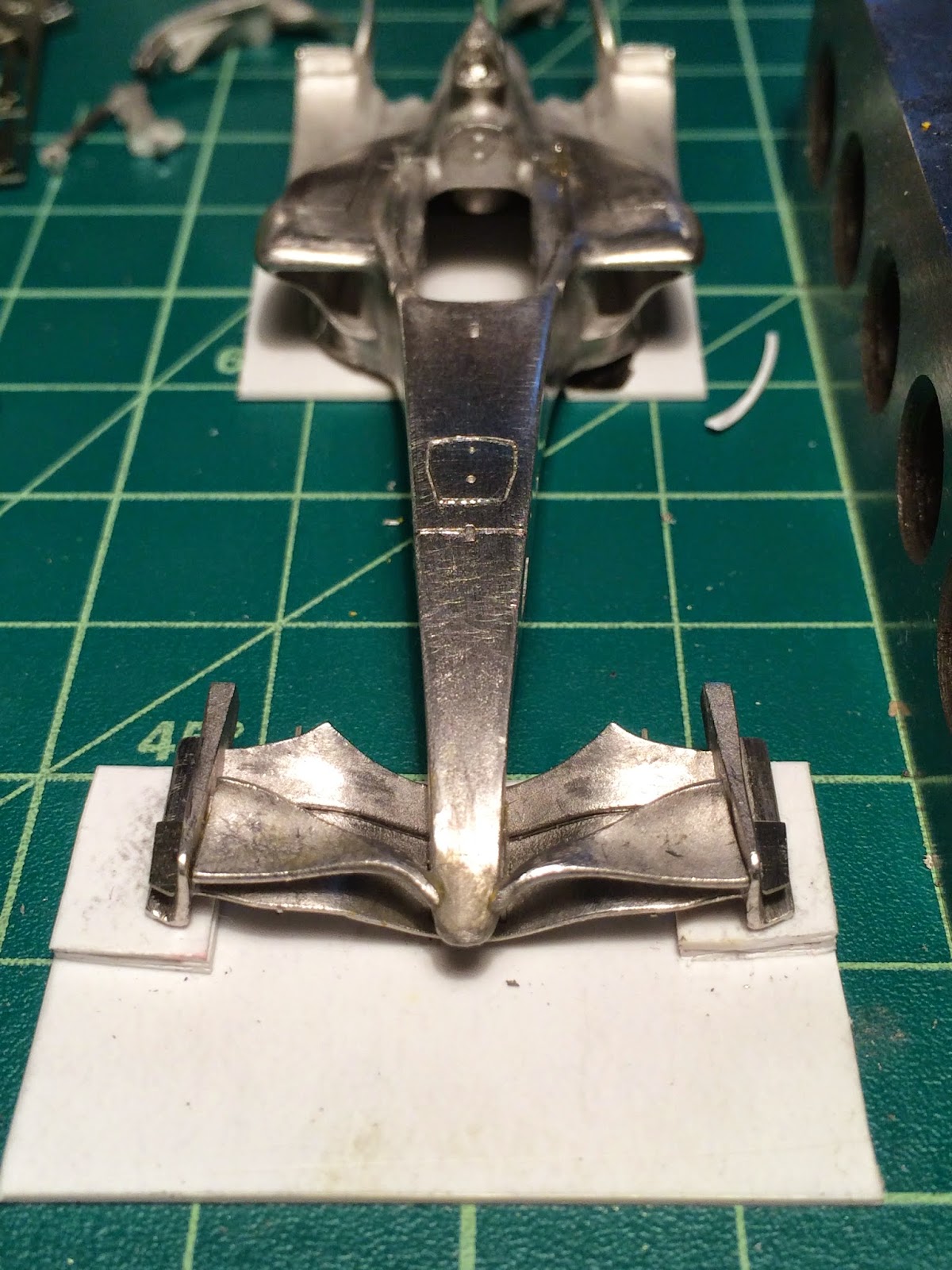 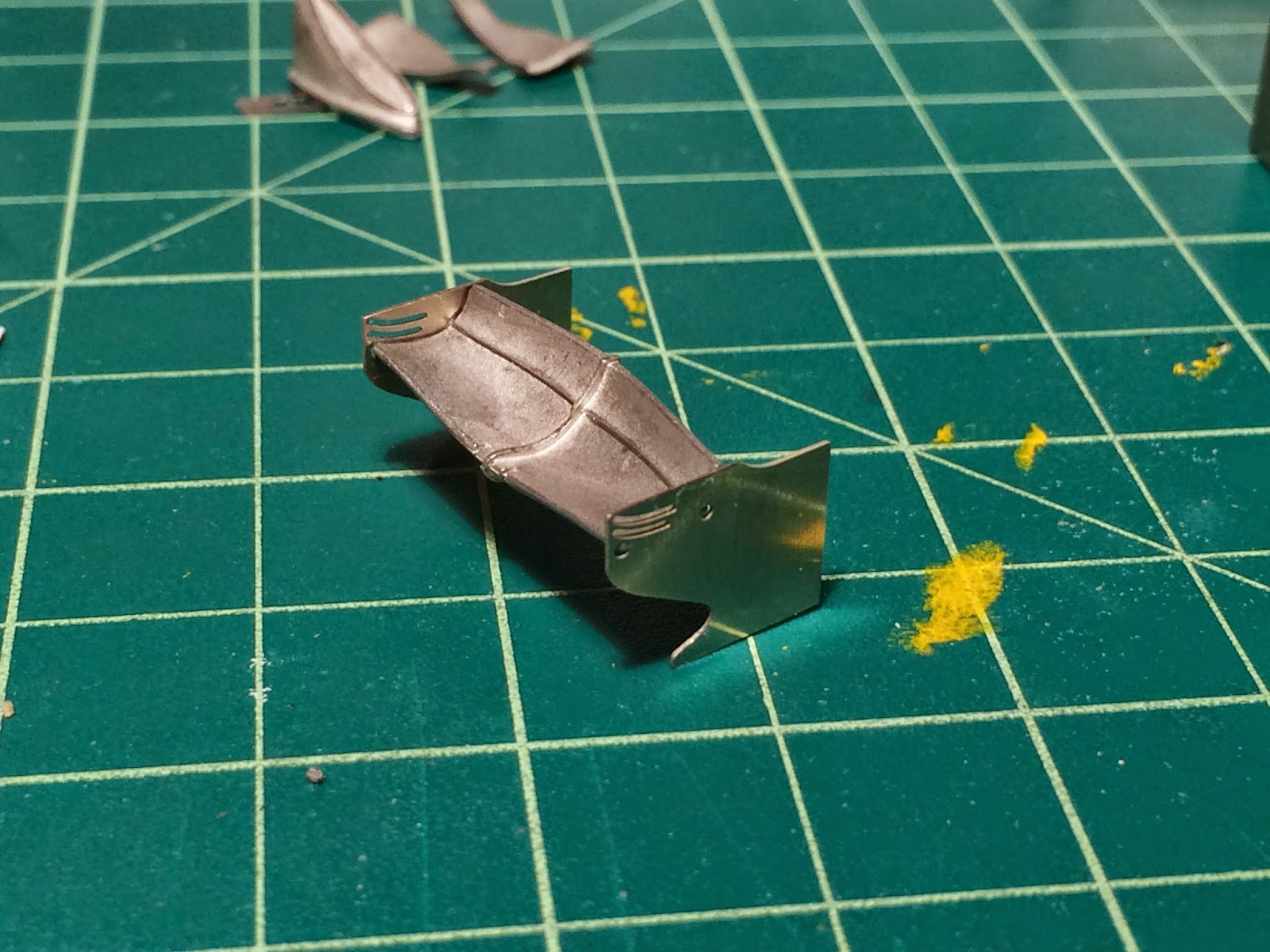 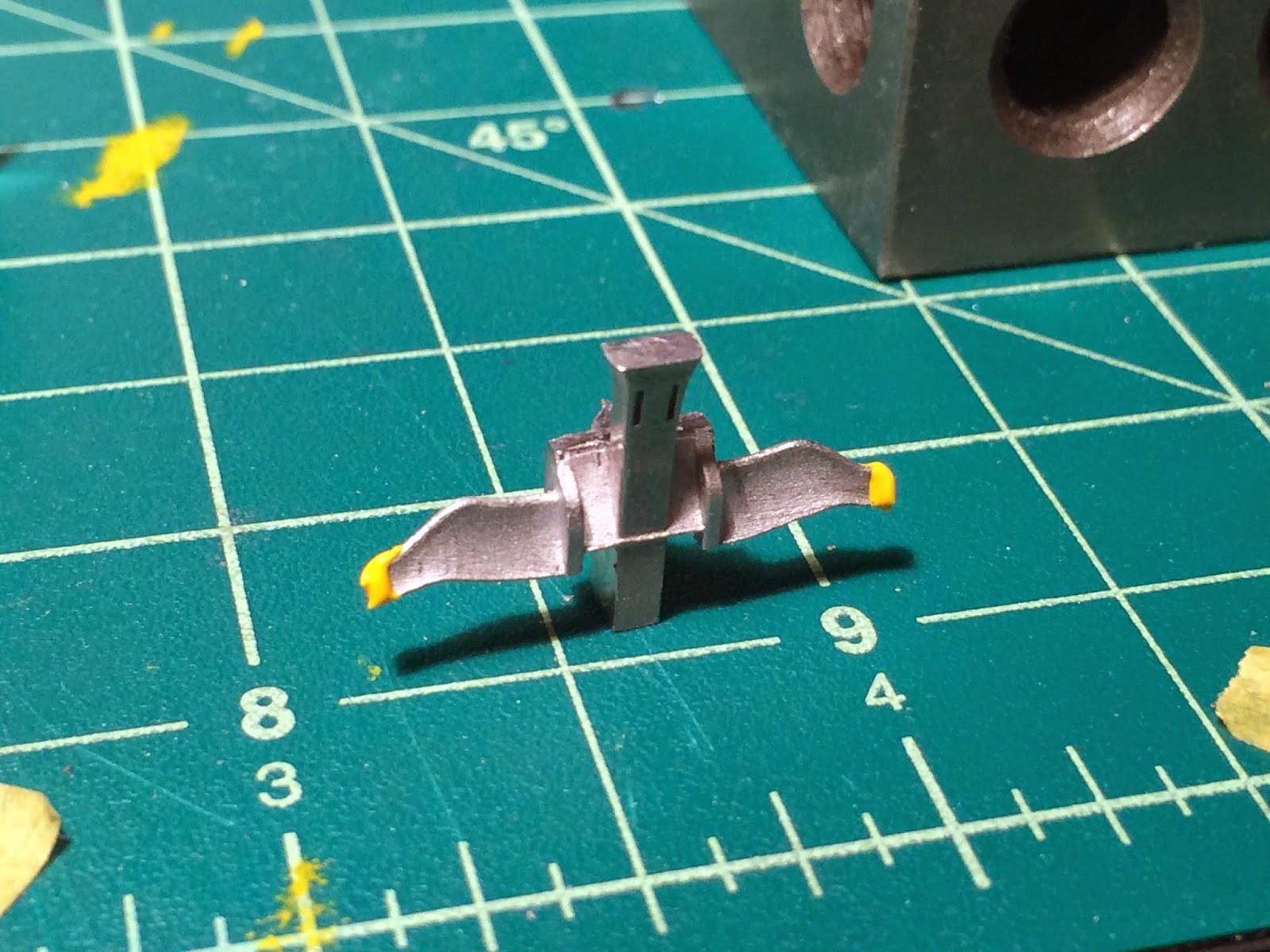 The Chill is here 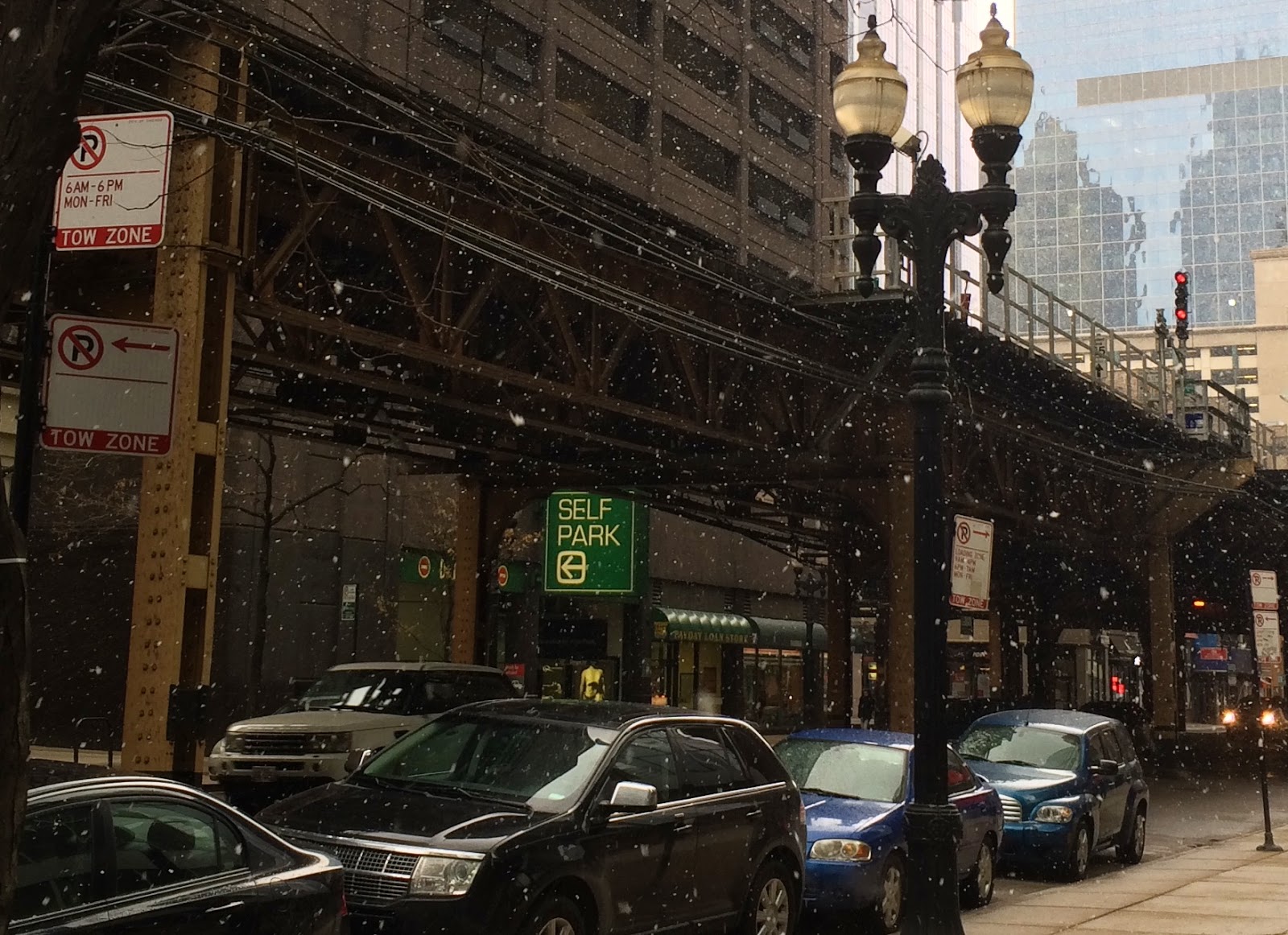 Winter is here in the Midwest, even though according to the calendar we are still a month away from winter. Last week temperature dropped to below freezing. And it is snowing in Chicago today. Since the clock is changed from daylight savings time back to standard time, and the fact that day is getting shorter and shorter, it is getting dark at 4:30pm in the afternoon. Lack of daylight is lowering my already low motivation to spend time at the workbench. It could be the beginning of a long cold winter. 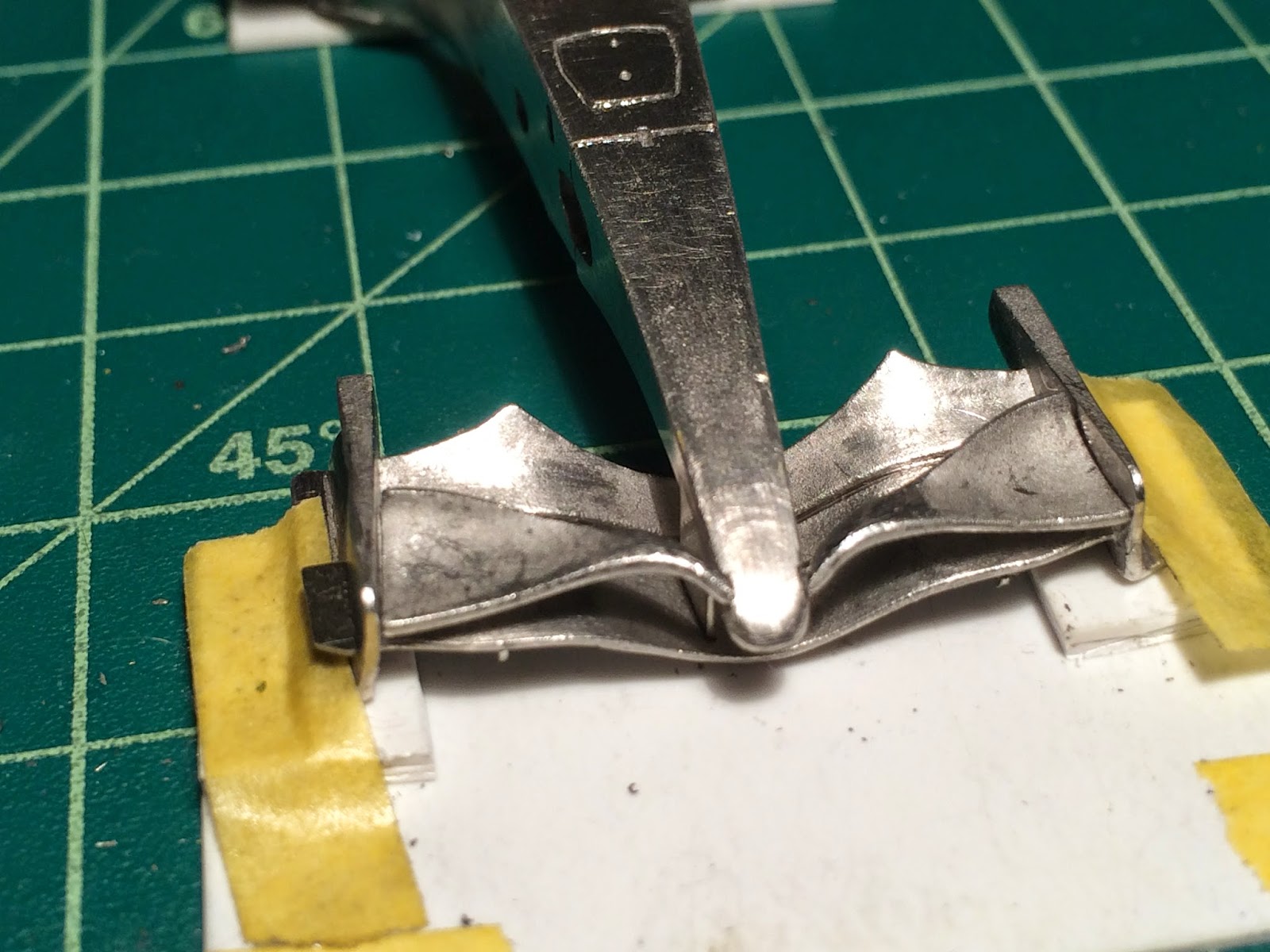 This is what I did this Sunday evening. The center part of the front wing being lower that the bottom of the end-plates, I have to make a fixture to get it to sit level. The upper front wing element is a pain to fit. Took me a while to "negotiate" with them to get them settle in. That's it for this week.

Next weekend is the last F1 race of the season, driver's championship is still not decided. I cannot wait to see Hamilton and Rosberg duking it out. 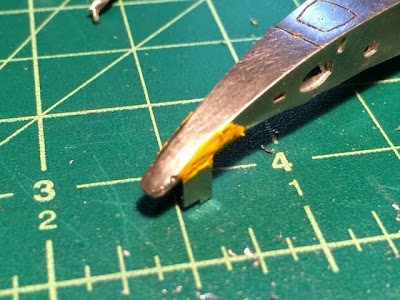 Attached the front wing pylons to the nose along with some putty. 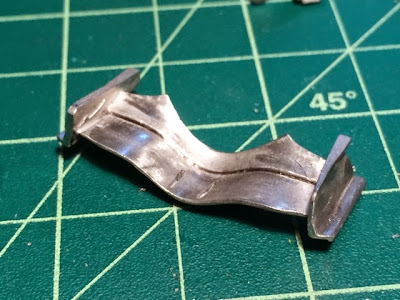 The front wing end plates were a bit too thick. In the picture the right end (left side in the picture) was untouched, and the left end plate got shaven down a bit. 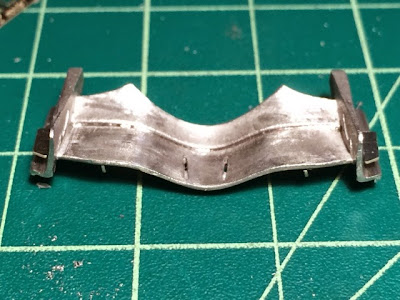 Done with trimming the front wing. Added those canards to the end plate.
Posted by Francis at 4:09 PM No comments: 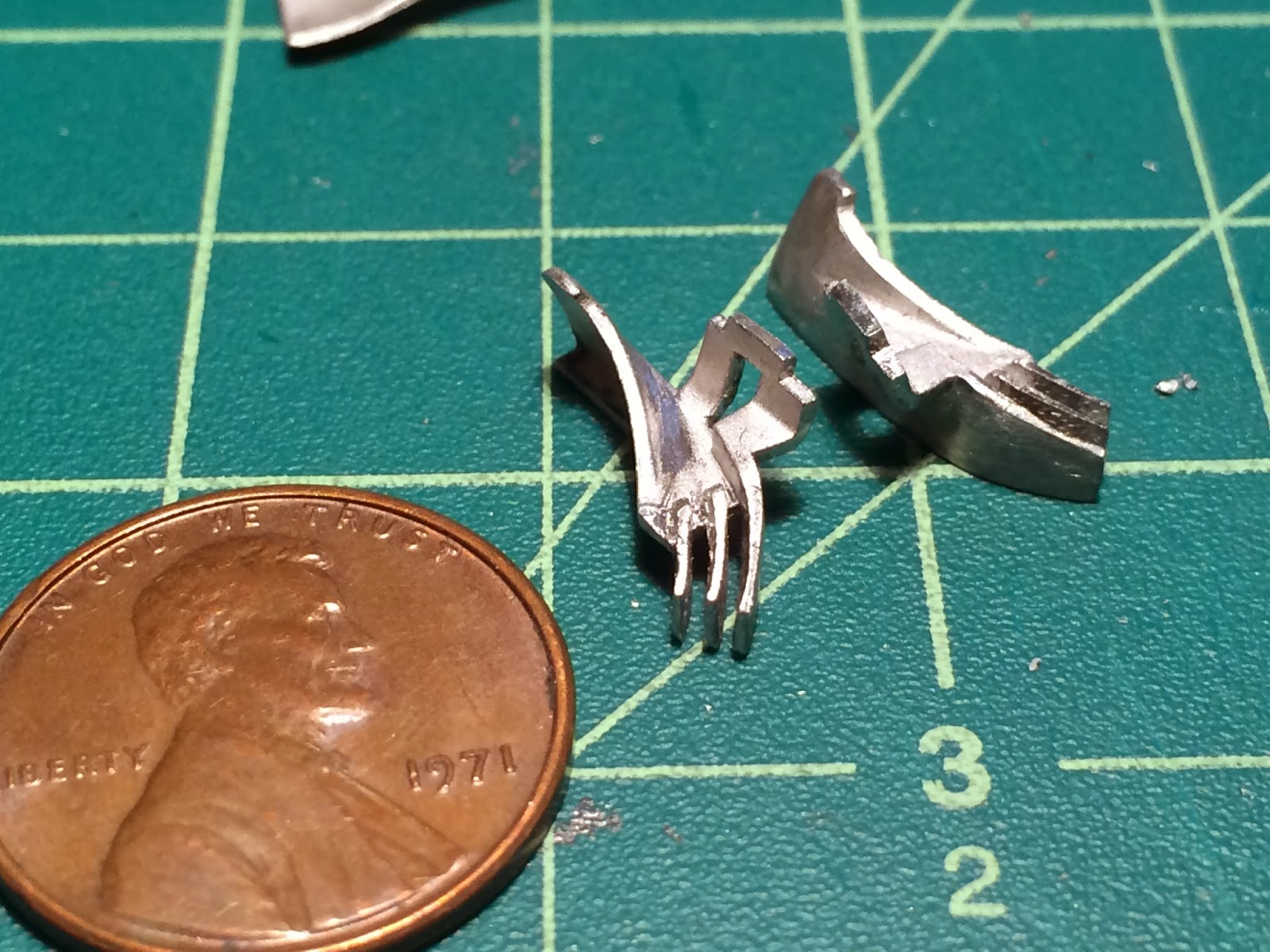 Spent last night and a little part of this morning shaving metals off from the turning vanes castings. As usual, right out of the castings, the vanes were too thick and need to trim down a bit. If I still have the motivation, I will test fit the front wing. 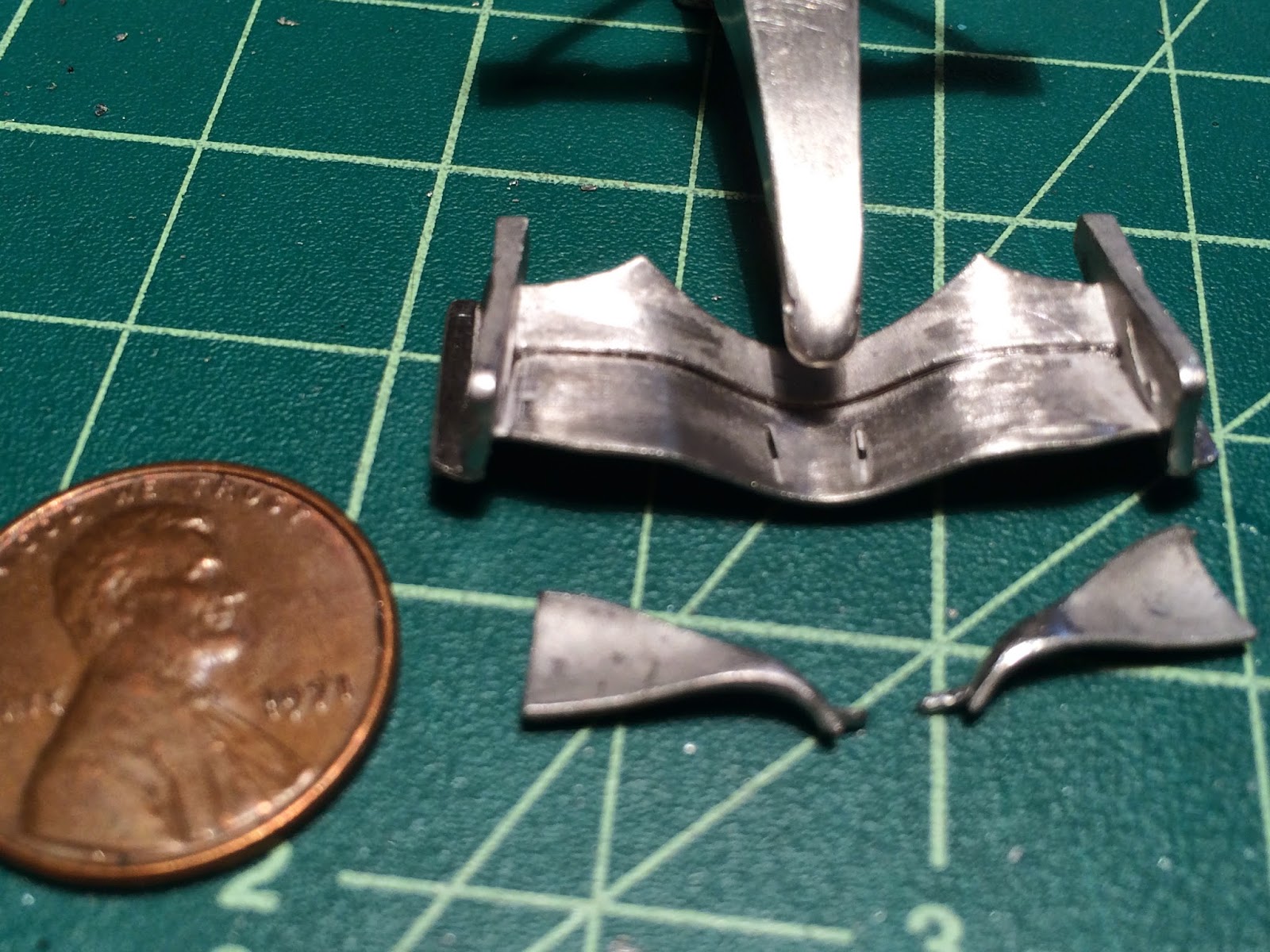 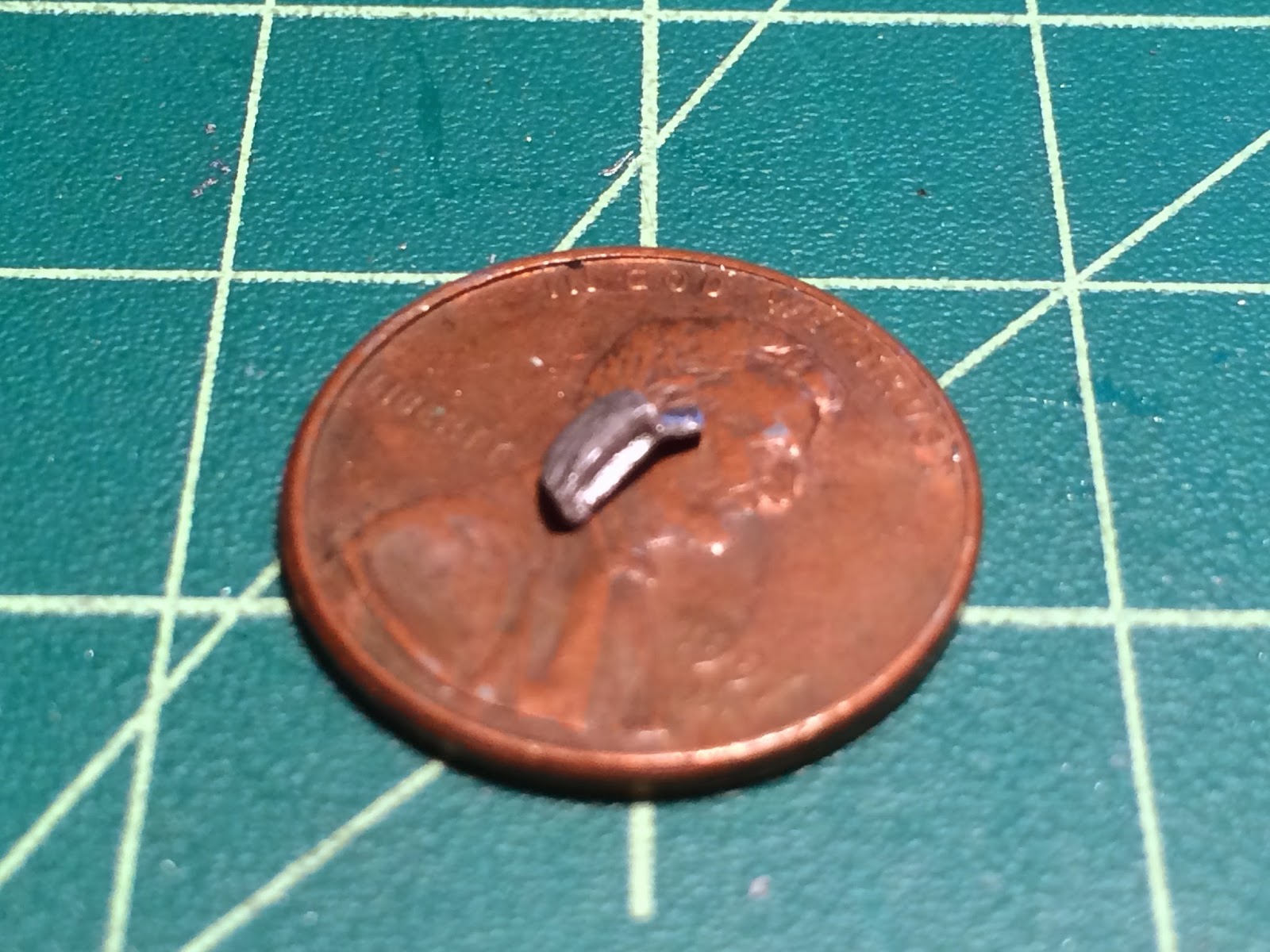 Not sure how I did it, but I managed to hurt my right upper back 2 weeks ago. It hurts when I tried to move my right arm. So, I tried not to do anything until today when the pain is gone. So, this is all I managed to do - one mirror.

Epilogue:
Couldn't help but did some more work after dinner. Another mirror and then cut 2 pieces of thin aluminum as mirror. 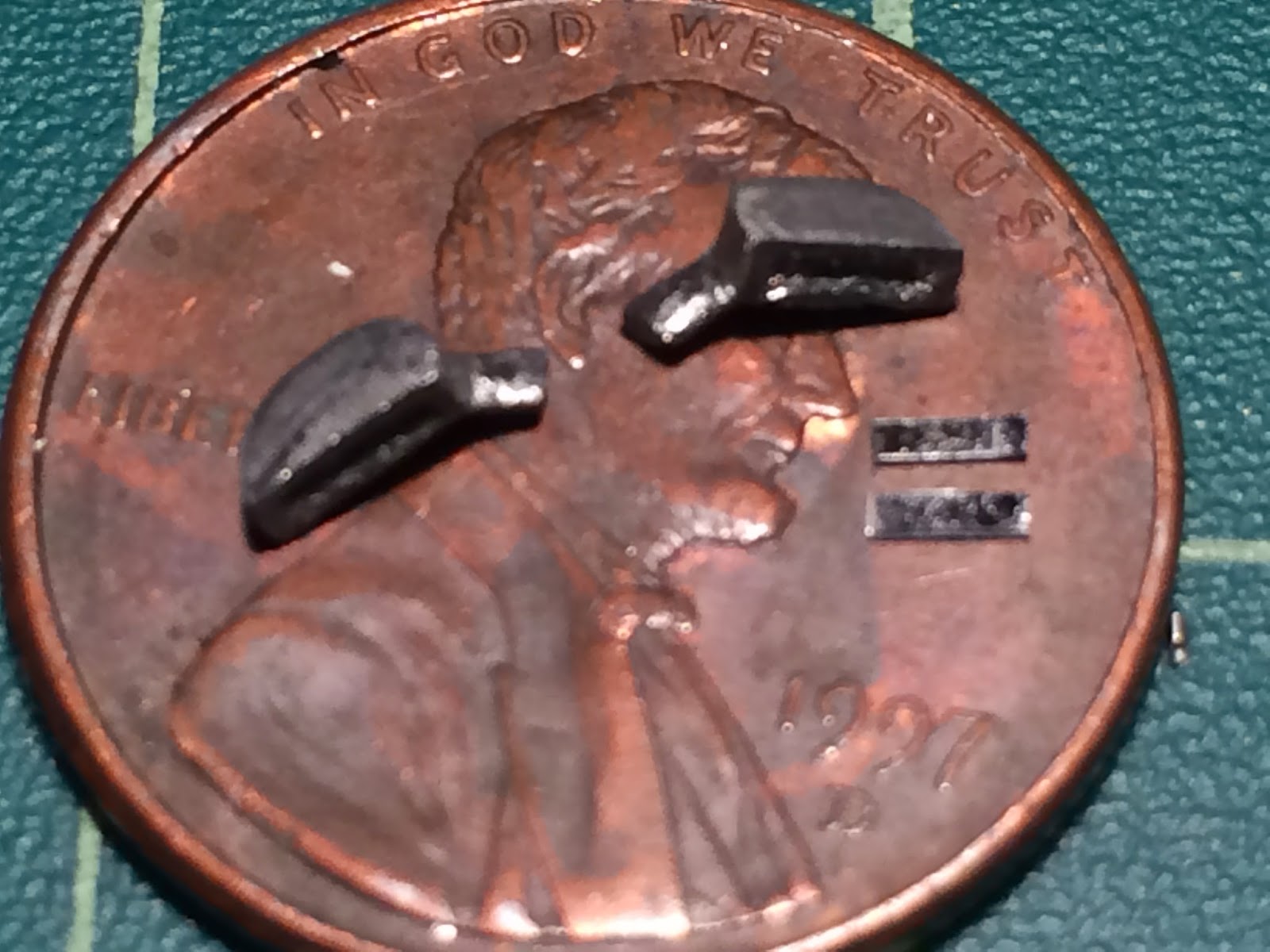