Liking MFH on Facebook is a mistake. As soon as they announced the release of Honda RA300, I preordered it through my dealer.

Same thing with the Red Bull Racing RB8, I have both versions ordered when Tameo announced he is releasing the kits.

When Ws43さん announced that the theme of this year is Racing43, I started looking. When I came across this 1981 Audi Quarttro, I acted right the way. With my ultra slow progress on the Ferrari, I will have to start building this guy right the way to have it completed before November.

The last one was a surprised find. I had a Provence Moulage 1995 Nissan Nismo GT-R LM No.23 which got a DNF. But in 1995, Nissan entered 2 cars to compete. The other car was No. 22, which actually finished 10th overall (5th in GT1). I came across this kit on eBay and I just know I must have it.

Regarding the quota for this year, MFH just announced it'll release a Lotus 79, and I've already preordered it. With that, I guess I can sell my Tameo WCT one. In that case, should that count against my quota? 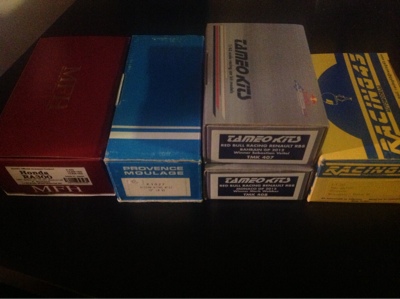