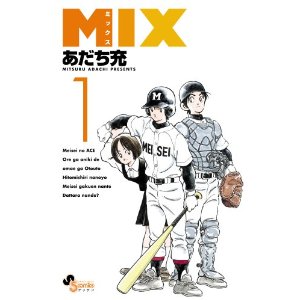 I started reading manga since maybe around 1st grade. There's a monthly kids magazine that has Doraemon in it. Of course it was translated to Chinese, I didn't start learning Japanese until after college.

I started reading Adachi Mitsuru's あだち充 manga maybe around my first year in secondary school (7th grade in US System). It was because of his work Miyuki みゆき being published in a weekly manga magazine in Hong Kong. Unlike Japan, nobody play baseball in Hong Kong. So, there was no market for baseball manga such as Touch! タッチ. So it was not published until a TV station in Hong Kong started broadcasting the anime version of Touch! I was about maybe 11th grade or 12th grade at that time. I was watching the story of Kazuya 上杉和也, Tatsuya 上杉達也 and Minami 浅倉南 unfold, and learning the game of baseball at the same time. (That really helped me when I moved to US and watch MLB)
Recently, I came across a picture like the one above. Saw the Meisei 明青 uniform, two guys and a girl, very familiar composition, but it is not Touch! It's actually a new series call Mix. Baseball, Meisei High School, "Twin Brothers", brother and a sister with no blood relation... Isn't it a hybrid of Touch! and Miyuki? No wonder it is called Mix. I guess it will probably have the same old story line and nothing new.

The sad thing is Touch! was published twenty something years ago. I was a young high school kid back then. Now, I am just a middle aged dude. I still read manga, I still watch anime, and I still build models. Is it a good thing or a bad thing?

Today is Superbowl Sunday, no building today. Only Food, drink and TV is allowed.
Posted by Francis at 2:32 PM