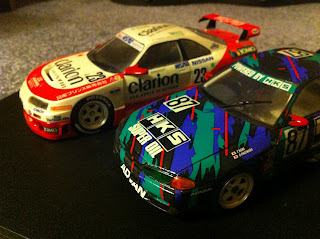 I saw a KPGC110 when I was very small. At that time I had no idea it's a Skyline GT-R. To my brother, it was just another Datsun, but for some reason, the fast back, its stance caught my eye and I fell in love with Skyline. Fast forward to my high school years, all of a sudden, a box of a big scale 2 door sedan/coupe looking Fujimi kit showed up on display in the window of the hobby store that I used to go to. (Didn't build much models during my high school years, I believe I talked about that in other posts) That's the R32 Skyline GT-R. Later that year, saw the car dominated in Macau GP beating teams with German machines. I knew there is something special about the car and I fell in love with Skyline GT-R once again.

Due to emission standards and marketing reasons (some said technical reason also - the location of the exhaust manifold of the RB26 made it impossible to build left hand drive version for North America), R32 and subsequently the R33 were never imported to USA by Nissan. When I couldn't own one, I can surely build models of the car.

It was probably my first year after college, I had time to build models again. I picked up these 2 kits, both from Tamiya in 1/24 scale. One is a R32 in HKS color, the other is a R33 based GTR-LM, Nissan's entry to Le Mans 24 Hours.

These were built years ago and had been in my room back in California. Since I am back home, might as well take some pictures of it and post them up. Lighting was pretty bad, and I was only using the phone camera to take the pictures, so I apologize for the quality. 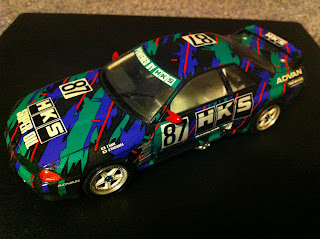 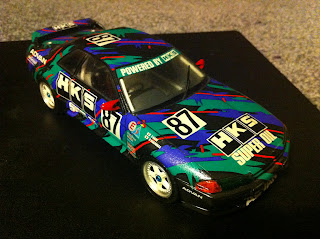 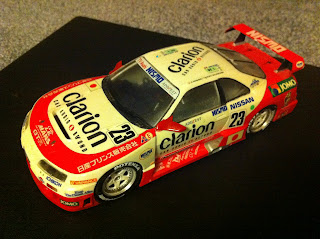 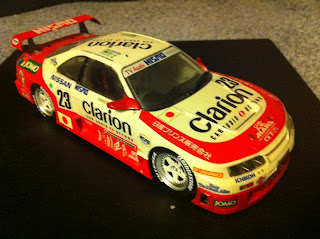 Email ThisBlogThis!Share to TwitterShare to FacebookShare to Pinterest
Labels: Not 1/43