Met an old friend of mine for lunch today. T and I when to the same high school. And we haven't seen each other since graduation which was almost a quarter of a century ago. While most of our classmates were into pop music, we were the few who were into Japanese comics, anime, Gundam models, airsoft guns... etc.

After eating ramen for lunch at a popular ramen restaurant in San Mateo, T took me to his storage where he is keeping a stockpile of toys. Most of the toys are various Gunpla (Gundam Plastic kits), many perfect grade, master grade from Gundam 0079, Z Gundam, Stardust Memory, to Gundam Seed. He also has collected some rare original SF3D kits which is now known as Ma K, some Imai made Macross kits, Gundam Fix Figuration, Evangelion, Mazinger Z, Getter Robot, Astro Boy...etc. More than enough to open up a store.

I used to be a Gunpla fan, but jump to the darker side of 1/43 cars. Anyway, it's always nice to catch up with an old friend, chatting on life, work and hobbies.

Here's a picture of T in his Gundam storage. 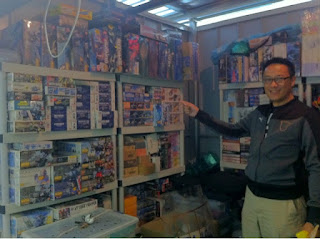