The SRC made 1979 Williams FW07 and 1980 Williams FW07B kits share so many common parts. After some thought, I have decided to build both kits side by side. The differences between the 2 kits are the side pods, engine cover and rear wing. The rest are exactly the same. Not sure how they'll turn out at the end, but I'm sure I'll have a lot of fun putting them together. 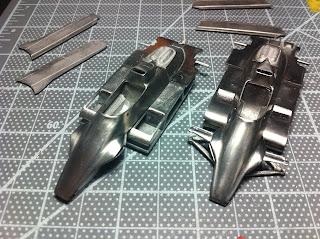 The mesh above the air funnels on the engine cover in in the kit is molded white metal. Inspired by the Japanese blog alpha macchina (who is building a Ligier JS11), I ordered some mesh material from Z Model. I'll try to custom make the mesh and cut out the molded portion of the kit.