Even though I am not even half way through my current project building the Tameo Toleman TG184, I've already planned out my next project. It's a 1980 Williams FW07B!

I was only planning to pick up 2 bottles of paint from the hobby store. But here's what I ended up with: 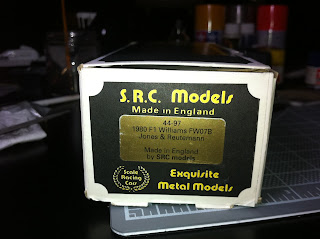 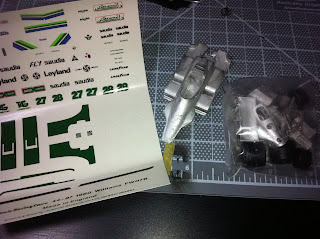 It's an old kit from SRC. I was checking out what Tameo kits the store has, but nothing really whet my appetite. I starting checking out other manufacturers and came across a bunch of SRC stuff. Among them, this Williams FW07 Alan Jones. And I know I have to get it.

FW07 was the first F1 car that got me interested in F1 racing. I was in second grade when FW07 in the hands of Alan Jones kept winning races and the championship. Back then, my dream was to buy a Tamiya FW07 RC car. I saved enough money to buy one, but my mom never allowed me to spend that kind of money on toys (to compensate, as an adult now I spent a lot of money on toys...)

For those not familiar with SRC, here is a Japanese guy's blog that I follow, he just finished a SRC made Lotus 78. Really impressive. Lotus on Alfa & Macchina