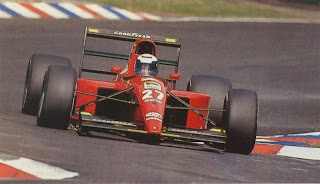 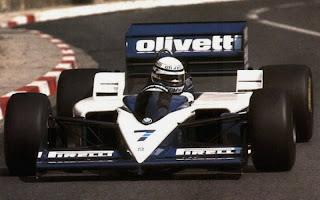 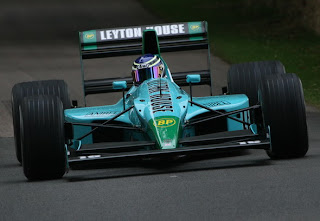 Wish whoever reading this all the best in 2012!
Posted by Francis at 11:50 PM No comments:

Yeah, it's an addiction

Sigh... Couldn't help myself. I Bought another kit from the bay. Another addition to my collection of also ran backmarkers, a 1984 Alfa Romeo T184. Benetton ditched Tyrrell and sponsored Alfa Romeo in 1984 and 1985. Then the money went to Toleman and eventually Benetton bought Toleman and formed Benetton Formula 1.
Posted by Francis at 1:01 PM No comments: 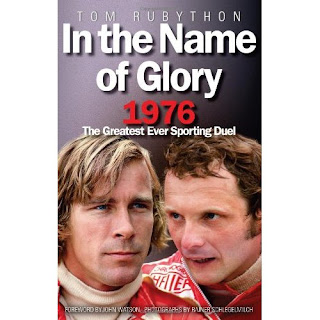 Also, famous director Ron Howard is working on a movie of the same story of the 1976 Grand Prix season. Don't know when it'll be released, but I really look forward to seeing it in the theater.
Posted by Francis at 12:10 PM No comments:

The side deflector plates are photo etched instead of cast (as in the case of the BBR Ferrari F399). Tameo provided a jig to bend it to shape. But there are these 2 little support at the bottom that need to bend at a right angle to the plate. I broke one off by mistake. And unfortunately, the piece flew off and disappeared. So I have to fabricate using the Photo Etch stem and solder it back.

The seat belt harness is painted and is now on the seat, just need to put the decals on. Top of air box is painted white, inside got a coat of flat black. The picture shows a test fit, it'll still need the dash, steering wheel, and head rest on before closing up the body. But that will be for 2012. 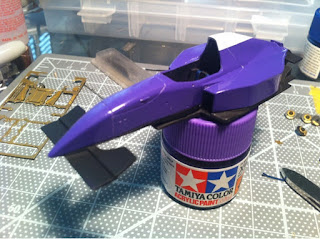 Posted by Francis at 9:10 AM No comments:

The last time I went to Marty's store and chat with the guys there, I learned a new airbrushing trick - use lacquer thinner to cut acrylic paint! Yes lacquer thinner. I added a bit more clear and lacquer thinner to the Tamiya X-16 and sprayed the car body. So now they looks like Barney the dinosaur. After it is dried, the body will need some polishing, then I'll need to spray the top of the air-box white and the inside of the body with flat black. 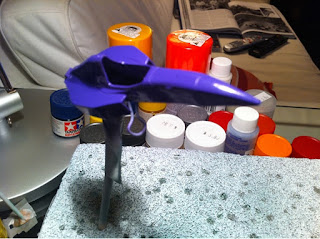 The base got a coat of flat black. 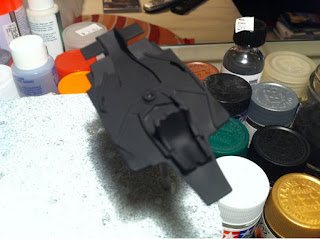 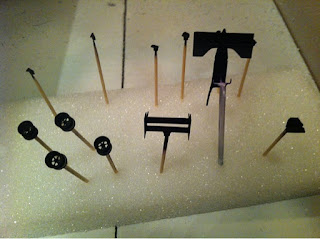 The wheels, head rest, front wing, front and rear brake cooling duct all received a coat of matt black. The rear wing needed more work. First the side plates were sprayed purple, dried and then masked before spraying flat black on the inside of the side plates and the 2 horizontal wing elements.

The 4 Brembo brakes with gold calipers were also put together. 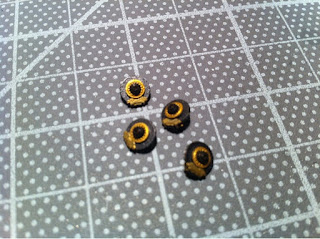 Posted by Francis at 7:07 PM No comments:

Well, I am still waiting for the primer to dry before I can continue work on the car's body.

Simtek is one of those short lived F1 teams, but they've been around long before they compete in F1. They have been an engineering consulting firm which was founded by Max Mosley (yeah, that Max Mosley) and Nick Wirth. The F1 competed in 1994 and (part of) 1995. Simtek was an unlucky team. 1994 San Marino GP, everybody remember that because of Senna's death. But not many people still remember the day before Senna's crash, rookie Roland Ratzenberger was killed during practice in the Simtek S941. The team finished the 1994 season without scoring 1 single point. In 1995, MTV the main sponsor of the team cut back their sponsorship and then other sponsorship deals all fell through. The team only competed in the first 5 races and then went belly up.

The team was only in existence for 18 months.

Posted by Francis at 2:08 PM No comments:

All holes are drilled. The body pieces cleaned up. And a coat of white primer on. 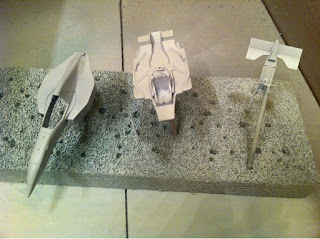 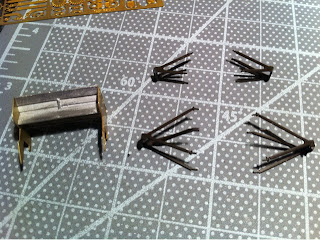 Could have done a bit more, but I'm a bit lazy.
Posted by Francis at 10:39 PM No comments:

Debated a little bit which kit I should work on. At the end, I picked the relatively simple kit of Simtek S951 1995 San Marino G.P. 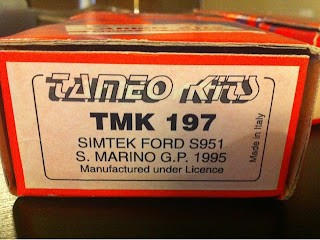 Got most holes drilled. And now is just cleaning up all the flashings and fix any body imperfection. 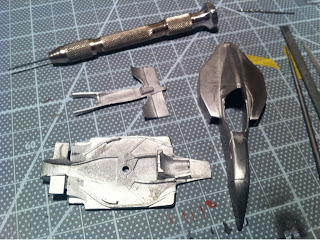 Bigger issue ahead is to get the right purple paint. The paint chip provided is some kind of metallic purple. Not quite sure what to do yet. May be I'll just use an off the shelf non-metallic purple.

After 1 whole evening of elbow grease, got the body cleaned up. 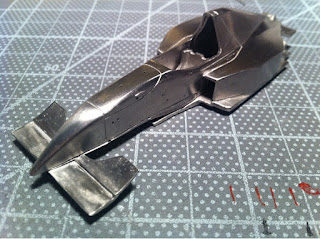 Posted by Francis at 5:10 PM No comments:

I think I am done. Overall a good learning experience. Building this S.R.C. kit made me appreciate the thought that Tameo put in when designing their kits even more. For one thing I think all kits should come with 2 sets of decals. Wheels should be turned machine parts rather than cast pieces. The mistakes I made in building this kit caused me to salvage parts from the FW07 kit. So, instead of 2, I only have 1 car built. 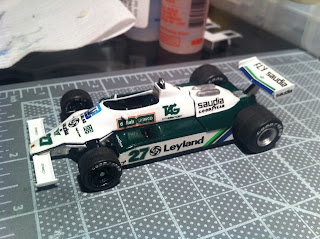 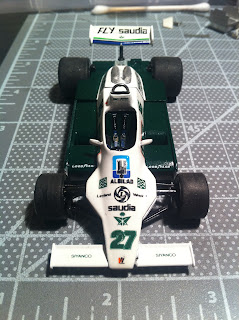 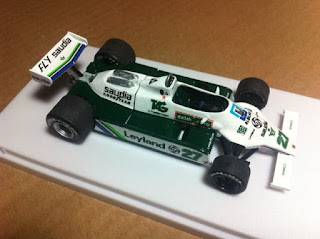 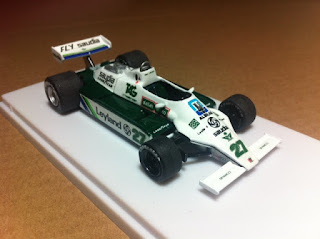 Another note - I did it again. Went down to Marty's store and picked up a Tameo SLK015 BAR 006

Just found out my current project at work will be wrapping up this week. So, I pretty much can resume my Williams FW07/FW07B full time! So, it's actually possible to finish before end of the year!

Read about the upcoming movie that director Ron Howard was shooting in the latest issue of F1 magazine. A movie about the 1976 GP season and the Rivalry between James Hunt and Niki Lauda. On top of that I just got the Model Art Extra Auto Modeling vol. 23 on 70's F1 cars. One project idea came up, build the McLaren M23 and Ferrari 312T2 that Hunt and Lauda drove in the 1976 season. Tameo made both kits, but both of them are super kits. Not sure if I have the skill and patience. But I just shot an email to my supplier to see if they are available.If not, I am out of luck. Even if they have them, the lead time is going to be 2 months. 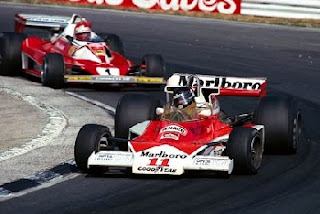 Posted by Francis at 6:43 PM No comments: