This would be my first SLK series build. Honestly, I do not know what to expect. Unlike typical TMK kit, it has reduced number of parts, but more metal cast pieces and fewer PE pieces.

BAR 006 was the most successful BAR car with a 2nd place in 2004's constructor championship, 2 years before it was sold to Honda. I always like the look and the livery of BAR cars (except 001 which has half 555 and half Lucky Strike).

Back to the kit. Even though it is supposed to be a precision cast kit, it does not mean that there is no need to clean the flashing and smooth out the parting lines. This time, I have 2 kits on hand, so I am picking out the better pieces to use from the 2.

Modern day F1 cars have all these winglets and vents which would be very difficult to cast in 1 piece. It is very cleverly made it into several different pieces. The main body is splitted into at least 8 different pieces.

This time, I am going to use the aftermarket racing harness set from Z-Model instead of the kit's photo-etched pieces. So, I opened up the slots on the seat with the 0.5mm drill and X-Acto knife. 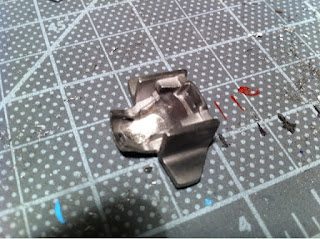 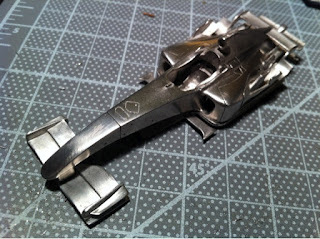 I cannot open up the rest of the holes for the suspension pieces yet, I need to order some 0.4mm drill bits. To add realism, I am going to use carbon fiber decal for the suspension pieces. Not sure why, 1/43 carbon fiber decals are hard to come by. They're totally out of stock at Scale Motorsports. Luckily, they are still in stock at some vendors.
Posted by Francis at 9:52 PM No comments:

Email ThisBlogThis!Share to TwitterShare to FacebookShare to Pinterest
Labels: BAR 006

It's bound to happen. And it happened. I am setting the Ferrari 643 project aside. I thought I was making good progress on the kit but then found out interference problem when I tried to test fit all the pieces. Then I found out why... The instruction was so bad that unless you read with a magnifying glass, you would not have noticed that there are some extra bending of the photo-etched parts required. Not feel like fixing them at the moment, so I am putting the kit aside.
Posted by Francis at 9:12 PM No comments:

Finally done. Too many blemishes here and there, it's another 10 footer. 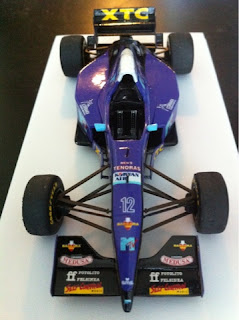 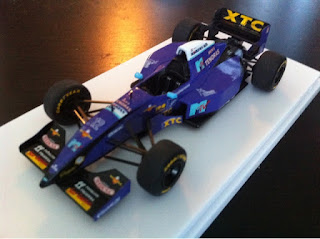 Skipped town last weekend, only work done was putting the rain light on and painted 3 out of 4 hub centers. Why only 3 out of 4? When I was putting the hubs on the wheels, one of the hub center fell off (bad application of adhesive?), I set it aside and have totally forgotten about it. After I painted 3, I noticed that the 4th one was missing. I freaked out for moment. I thought it fell off when I was painting the hubs, so I looked around my work bench and wasn't able to. Just when I was going to throw the towel, I open up my parts bin (where I keep all the pieces when I unbox a kit) and saw that tiny bronze turned hub piece sitting inside the bin! What a relief!

Remember the barge boards? The two which I managed to broke or lost all 4 support brackets? I decided to fabricate the supports. I bought a reel of 24 gauge (close to  0.6mm in diameter) anodized metal wire (black anodized, saved me time to paint them) from the art supply store, drilled out the plates with a 0.6mm drill and glued 4 short pieces on. Then bend and trim them. The result is not too bad. 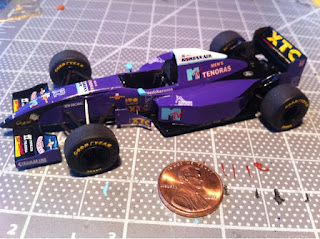 The last 2 tasks outstanding:
Should be able to finish next week.
Posted by Francis at 3:54 PM No comments:

Put together the front wing. 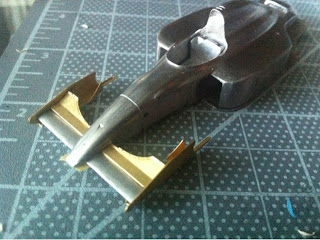 Email ThisBlogThis!Share to TwitterShare to FacebookShare to Pinterest
Labels: Ferrari 643 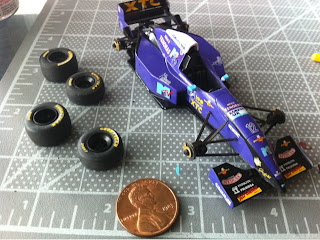 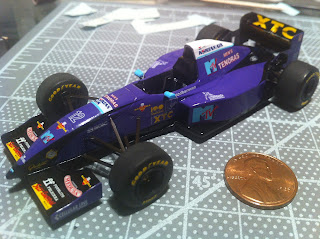 Although I have not finish the Simtek S951 yet (just need to put the rear suspension pieces and the wheels on, so final touches), I started working on the Ferrari 643.

Ferrari 643 in my opinion is a good looking car. Unfortunately, it was no match to competitions like McLaren MP4/6 or Williams FW14.

Anyway, this is the second 1/43 Ferrari that I build. The first one was a BBR Ferrari F399 kit. Although it is not the first, it is my first Meri Kits. A very simple kit with not a lot of parts. Paint scheme and decals are also quite simple. Should be a quick build.

First order of the day, clean up the body. Filed off flashing from casting, fixed the some defects by soldering. For the couple of spot that did not want to take solder, I use putty as filler. That's all for now. Next step will be drilling holes. But that will need to wait till the Simtek is all done. 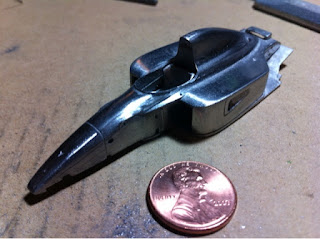 Posted by Francis at 1:20 AM No comments:

Email ThisBlogThis!Share to TwitterShare to FacebookShare to Pinterest
Labels: Ferrari 643

Found this in the mail today! Another one from Tameo's WCT series. Mario Andretti's 1978 Lotus 79. A DFV powered ground effect car. This black and gold JPS livery is a classic. 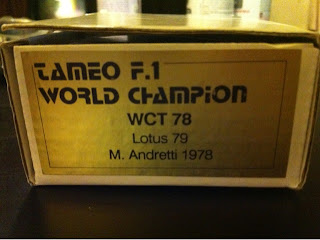 Posted by Francis at 9:29 PM No comments: